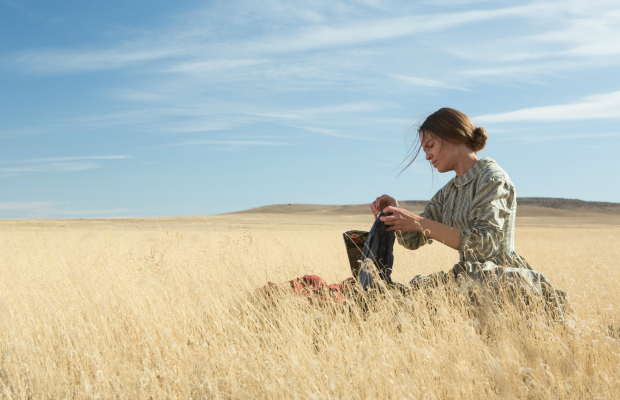 The more I think about Tommy Lee Jones’ The Homesman, the more I like it. The Homesman, given a limited release in the 14th of November, is a bit of a riddle, but may prove to be one of the single most feminist films of the year. Allow me to elucidate below. Warning: I will give away the film’s plot twists. I apologize for this, but I have to in order to analyze it. If you wish The Homesman to remain a surprise, watch it before you read this review.

There is a fallacy in pop feminism that merely by making a female character physically strong, you are somehow making her character stronger. Certain filmmakers seem to think that if you can shove a sword or a gun into a woman’s hand – if you can give her a sort of rudimentary phallic extension – then you can make her “stronger.” In short, in order to make a woman strong, you have to make her violent like a man, and hold a weapon like a man. It’s rare that you see a cinematic woman (and I refer most specifically to genre cinema) who is simply capable and commanding without being mannish or violent.

Mary Bee Cuddy, as played by Hilary Swank in The Homesman, is one such capable and commanding woman, whose authority is all the more striking for her classically cinematic Western surroundings. Mary Bee Cuddy lives alone in a grim, flat portion of the Old West that looks like it’s suffering through an eternal blight. Despite the cold surroundings, Cuddy manages to run her own ranch, keeps a home, and keep herself well-fed. She is comfortable with her surroundings, longs for a piano, and is strong in the face of a crisis. 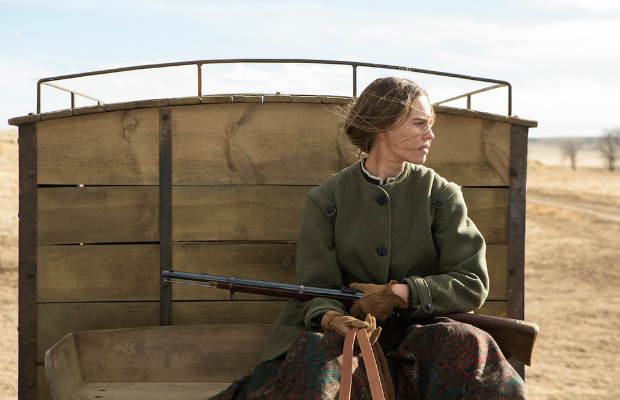 The story of The Homesman involves Cuddy escorting a trio of insane women out of her county on a five-month trip east. The three women (played by Miranda Otto, Grace Gummer, and Sonja Richter) have been driven mad by their surroundings. Their men (uncaring at worst and clueless at best) are incapable of looking after them, and they have all suffered dramatic losses. They have all snapped. At least one of them has murdered their own infant child, and perhaps two of them have. They are far gone. They do not speak, they thrash out violently, and they must remain chained up at all times. Tommy Lee Jones – clearly a student of Sam Peckinpah – films his cold, turgid exteriors and prison-like expanses as a way of explaining these women’s insanity: This land is so harsh, and this milieu is so damning to women in particular, that you can understand why these three particular people have lost their minds.

Which makes Cuddy’s strength all the more impressive. Not only is she surviving in this harsh Old West, but she is thriving. She lives by herself and runs her ranch with a good deal of elbow grease and tenacity. She is the one who will ultimately volunteer to take the women on this harrowing journey, all because the men (and this journey is seen as a man’s job) are unable or unwilling to do so.

In less complex film, that tenacity would be enough. A lazier filmmaker would select “tenacious” as Cuddy’s singular personality trait, allowing her to remain an inspiring, if not super-simplified, aspirational figure for women. But – and here’s why Jones’ film is particularly notable and particularly daring – Cuddy is not content. She is smart, strong, rich, talented, far more capable than the men in her community, and certainly adaptable to harsh environs, but she is not happy with her lot. What she really wants in her life is a man.

Early in the film, Cuddy is seem romancing a local cowboy with rich foods, baked goods, and sweet songs. When she proposes marriage right at the dinner table, the fellow outright refuses. For one, she’s too bossy, and for another, she’s very plain-looking. The men in this universe reject Cuddy because – despite her richness of character and capability of survival – she lacks the two traits a woman must have to attract a man: good looks and a streak of subservience.

Tommy Lee Jones plays the male counterpoint to Cuddy, and will serve as the film’s brusque conscience. Jones plays an old claim-jumper named Briggs who is rescued from a lynching by Cuddy, and who will be hired as her guide on the harrowing five-month journey.

Briggs doesn’t think much of women. He’s not a protofeminist. Too many period films about prejudice tend to be loaded with modern-thinking progressives to stand in for the modern audience (just look at The Imitation Game and it’s gaggle of gay-friendly straight folks who seem to know more about homosexuality than the film’s homosexual lead). Briggs is a hateful curmudgeon who doesn’t really think of women one way or the other. He’s just in this for the money. Briggs and Cuddy will end up forming an odd relationship that is based more on recognized mutual adaptability than friendship or romance.

Cuddy, however, longing so very hard for a male presence in her life, elects to turn that relationship into a romance. And that’s her tragedy. Briggs doesn’t want romance. He says so right to her face. He doesn’t want to have sex with her. Even Briggs calls her plain and bossy. But Cuddy needs a husband. She needs company. She needs validation from a male in her life. She and Briggs do sleep together, but it’s entirely at her insistence. Briggs even says that he doesn’t want this, and establishes that this is her request. He did not force her at all.

The next morning, Cuddy commits suicide. Cuddy, the strong, capable, interesting woman of the Old West, was too lonely and exposed to too much tragedy to continue. This is a man’s world, and she knows it. Cuddy is a feminist martyr. And this is only about two-thirds of the way through the movie.

The film them becomes about Briggs, and how he becomes more… “sensitive” is the wrong word for such a thick-skinned and grizzled fellow; let’s say “aware”… of needing to help the women around him. He is the one who must ensure that these women can be given justice and care. He essentially becomes a hard-fisted and violent instrument of protection for these women. Not through frontier vigilante justice, mind you – The Homesman is not a rollicking vigilante story by any stretch – but by actually becoming aware.

So ultimately The Homesman features a legitimately strong woman who becomes a martyr to subtle social norms, and the man who is changed by her death. In a way, The Homesman is about the birth of feminism in the heart of a man who didn’t even think that feminism was a thing until just now.

I don’t think Jones would necessarily agree with my assessment; his film is far more of a mood piece than any sort of cerebral polemic. But I think he would agree that his movie is very much about the vague and unstoppable injustices faced by women in the early years of this country. The final scene of The Homesman features Briggs, on a small crowded ferry, carrying a tombstone back to Cuddy’s buried body. He is drunk, and puts the tombstone down to sing and dance away the asshole townspeople he is fleeing. As he dances, Cuddy’s tombstone falls off the ferry into the water. Even Cuddy’s memory is buried in this land.

It’s sad to be sure. But it is powerful.

Witney Seibold has been a film critic for many years, and is currently the co-host of The B-Movies Podcast on CraveOnline. You can contact him on Twitter at @WitneySeibold.